skip to main | skip to sidebar

"...to facilitate collaborative research into the ecological and evolutionary processes driving the ongoing invasion of lionfish (Pterois spp.) in the Caribbean and western Atlantic"

ABOUT THE LIONFISH TISSUE REPOSITORY


What is the LTR?
The LTR is a large, multi-national collaborative program intended to maintain and provide tissue samples for reearch into the ecological and evolutionary processes driving the ongoing invasion of lionfish (Pterois spp.) in the Caribbean and western Atlantic. Species invasions are a principal threat to biodiversity, food security, human health, and economic development. Insight into the mechanisms driving marine invasions will unquestionably aid ecosystem based management efforts aimed at improving regional resistance to future invasions. Additionally, findings regarding the forecasted spread of lionfish throughout the western Atlantic will provide early warning for downstream ecosystems and political jurisdictions, thus enabling proactive conservation measures. Finally, we anticipate that findings stemming from the LTR will lay the foundation for future investigations into the specific ecological impacts caused by lionfish, and in doing so, will help biologists and managers understand the specific mechanisms by which lionfish are restructuring Caribbean reef ecosystems. Such information will help both predict future change and provide insights for developing management actions to mitigate the effects of this invader.

Who Contributes to LTR?
Scientists, managers and fishers throughout the western Atlantic have contributed tissue samples to the growing database. Large collections of samples from the eastern United States, Bahamas and Cayman Islands have been contributed by NOAA, the Reef environmental Education Foundation (REEF), Oregon State University, George Washington University, and the Cayman Islands Deparment of the Environment. The repository currently includes >2,000 samples from throughout the invaded range, dating as far back as 2002. The repository collection continues to grow rapidly. We welcome the addition of other sample collections. While many of the samples included in the tissue repository represent whole individuals, we are currently only collecting and inventorying both dried fin clips (easy to mail) and heads (that include otoliths, or ear bones, useful for aging fish) . For details on tissue sampling methods and submission, please see here.

Who Manages the LTR?
The repository is jointly managed by NOAA (Beaufort Lab) and the Reef Environmental Education Foundation (REEF). There are currently well over 2,000 tissue samples from fish throughout the invaded Caribbean and representing a decade long time period from the eastern coast of the US. As samples continue to accumulate, we expect that this tissue repository will yield a uniquely detailed genetic history of a major invasion.

Who is Using the LTR?
The LTR is an international collaboration. Our intent is to carry out collaborative research that will help understand the invasion (and invasion ecology/evolution in general), identify mechanisms for mitigating the invasion impact, and prevent future marine invasions. We anticipate that the LTR will be most useful for the study of lionfish genetics or molecular ecology (e.g. stable isotope ecology). There may, however, be additional applications we have not yet considered. By maintaining the LTR, we preserve the opportunity to address future research questions in an opportunistic manner. For additional questions about on-going research, contact the project principal investigators (Dr. James Morris or Dr. Brice Semmens) via email.

Where do we have samples from so far?

The map on the right (click to enlarge) shows the collection locations throughout the tropical western Atlantic included in the Lionfish Tissue Repository as of November 2009. Note that this is no longer a current map, as we have recently received samples from many additional locations -- apologies if your location is not depicted on this map! In the next month or two we plan to develop and post a dynamic map linked to the LTR database so that it updates with each new sample location received. While the yellow pins show the distributions of samples, they do not show the densities of samples. For instance, while the TLR includes thousands of samples from the eastern US, there are relatively few samples from the eastern Caribbean. This reflects both sampling effort, and the fact that the lionfish "front" has only recently arrived in places like Trinidad and Bonaire.
Posted by BXSemmens at 3:48 PM No comments:

A brief history of the lionfish invasion in the Atlantic... 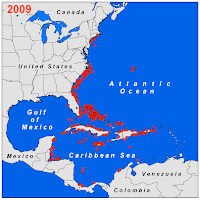 The lionfish invasion in the wes tern Atlantic began in the mid 1980s off the southern coast of Florida, USA (Morris et al. 2009, Morris and Akins, in press). By 2000, individuals had been sighted off the coast of North Carolina and Bermuda (Whitfield et al., 2002, Semmens et al. 2004). Since that time, the range of the invader has steadily increased southward encompassing much of the Caribbean (Schofield 2009). While two species of lionfish (Family: Scorpaenidae) have been found off of the eastern US (P. volitans and P. miles), only P. volitans has been found in the Caribbean and Bermuda (Freshwater et al. 2009). Results of field surveys along the U.S. Southeast coast and the Bahamas suggest that lionfish densities are similar or greater than most native grouper species (Serranidae; Whitfield et al. 2007, REEF 2008). Questions regarding lionfish dispersal and plausible control strategies for the Caribbean remain unanswered.
Posted by BXSemmens at 3:33 PM No comments:

Here's all you need to submit tissue from the lionfish you just collected.

Please note: contact Dr. James Morris to have a sample kit mailed to you. The tissue samples must be placed on special paper (Whatman paper).